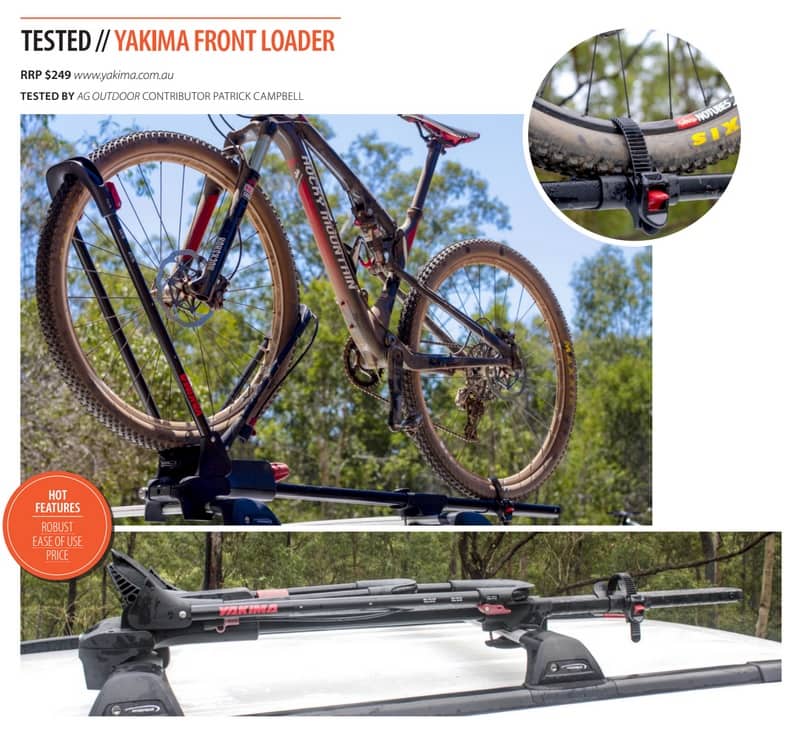 "THE YAKIMA FRONT Loader has been carting our bikes for more than six months now and it’s fair to say that we have been mightily impressed by it.

When we first saw the Front Loader we were immediately taken by its unique design. As the name suggests, the bike is secured primarily by the front wheel, which is clasped tightly in an adjustable cradle that can accommodate wheels from 20-29" diameter. Additional restraint comes in the form of a simple ratchet strap on the rear wheel.

Because the system doesn’t clamp onto the frame in any way, absolutely any bike will fit, regardless of frame design. It’s all very robust and we’ve not given a second thought to carting about heavy downhill bikes or bulky 29ers.

Operating the rack is very simple. Flip up the front wheel cradle and roll the bike in – the bike is now supported and won’t topple off – then ratchet down the rear strap, turn the red dial on the front wheel cradle and you’re done. There’s an integrated cable lock too, so you can quickly secure your bike to the rack should you need to leave the car to buy a soft-serve.

Those of you who have run roof-mounted bike carriers before would be aware of that familiar whistle that comes from having an object disrupting your car’s aerodynamics. Although the Front Loader might not look so sleek and aerodynamic, we found the whistle to be non-existent, with or without the bike on the roof. This was assisted further by the super-quiet Whispbar roof racks that Yakima Australia has partnered with, and which are part of our test set-up.

The Yakima Front Loader has been a big hit so far. Its ease of use and absence of any compatibility problems afforded by the unique wheel clamping system is brilliant."