It doesn’t matter how much room we seem to have in our car, caravan or trailer. When we go away on a camping holiday most of us can easily fill this space with what we consider to be ‘important’ or ‘must have’ gear. The more space we have, the more things we seem to take. But that’s ok, we’d hate to leave something behind, right?

Our active lifestyles too, often call for more practical storage space for bulky items such as bicycles, kayaks, and extra camping gear, for us it is the latter. As a family travelling Australian in a 4x4 , extra space for our bulky camping gear and kids toys is a  huge bonus. It makes life on the road a little easier when it comes to fitting everything in. That’s why we decided to install a roof bar system to our recently purchased dual cab ute. The addition of a roof bar system enabled us to also fit a roof basket which created a great platform for securing our extra camping gear and a roof-top bag (another great addition).

The Yakima LockN’Load system bars we fitted have proven to be a great choice for us. Although installation is fairly straight forward on most cars, we had ours installed by a roof rack specialist. In our eyes, this was the best and safest way of ensuring a secure and proper fitment.

One of the reasons we chose a Yakima LockN’Load system was that we liked the look and style compared to other systems that we had compared. As our vehicle was relatively new, we didn’t want to spoil the appearance with an ugly bar system. But the final decision came down to the quality and the Yakima LockN’Load are truly a tough bit of gear. It was important to us that our bars were going to handle the corrugations and rough roads we planned on travelling. So far they have performed brilliantly. They are perfect for 4x4s, SUVs, and anyone who loves touring, especially for those that love going off-road and requires a bar that’s built for the job.

·        Rubber protector strip that helps prevent load shifting (also protects items from getting scratched).
·        T-slot channel, which means we can easily fit most common accessories if needed (such as bike racks).
·        Lockable caps to prevent theft.
·        Low noise and modern look (which is perfect for late model vehicles).
·        Integrated bottle opener in the end caps!
·        Easy to access tie-down points to secure your load.
·        Rugged, tough construction to handle off-road and touring environments.

If you are a keen 4x4er, love getting off the beaten track and seeking adventure, then you will want to look for a roof bar system that’s going to be tough. Tough enough to handle rough roads and still keep your extra gear secure. The LockN’Loads are certainly a great options. 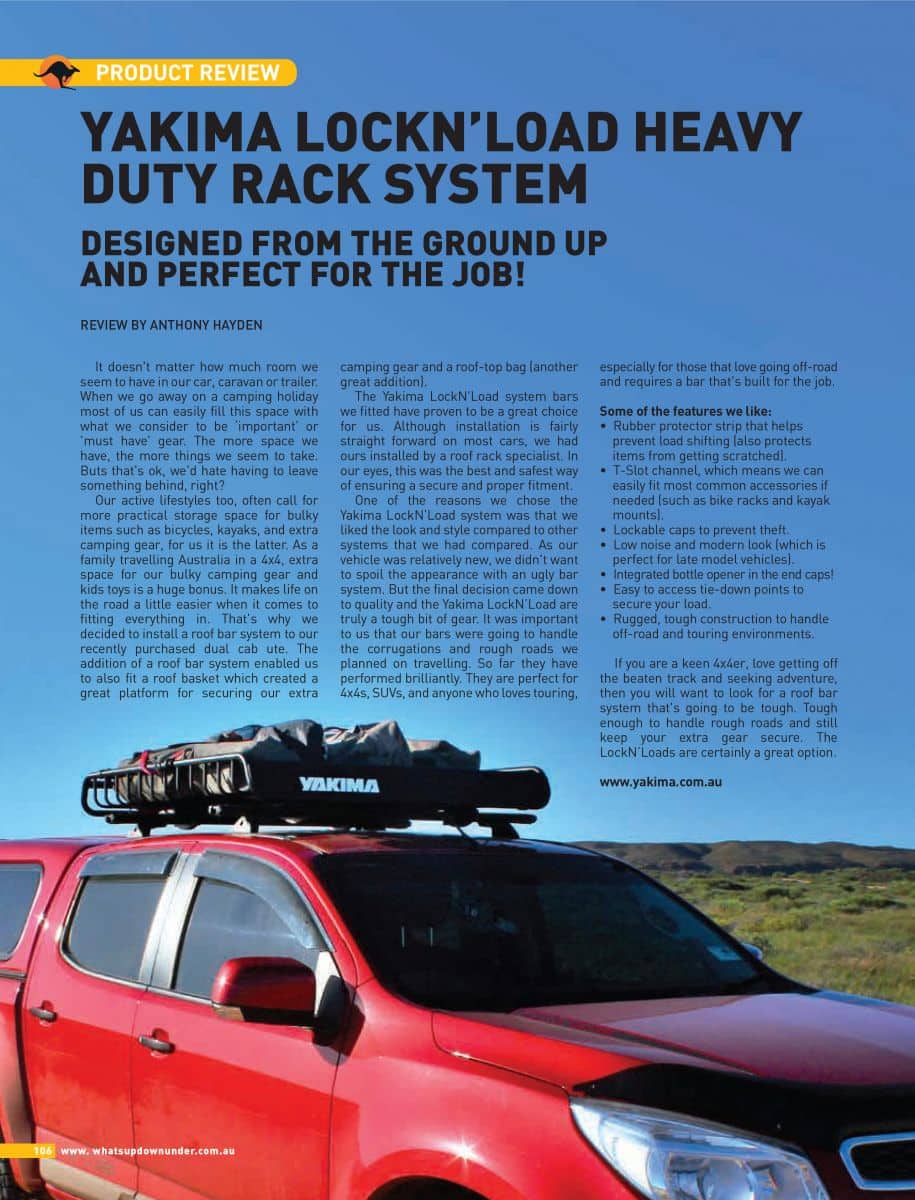